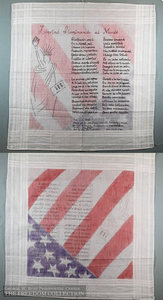 In January 2009 President Bush received this poem written by Dr. Oscar Elias Biscet, then perhaps Cuba’s best-known prisoner of conscience. The poem was written on a handkerchief and smuggled out of prison and out of Cuba. In the poem Dr. Biscet honors President and Mrs. Bush for their work on behalf of freedom in Cuba and around the world.

Oscar Elias Biscet is a physician and a prominent advocate for human rights and democracy in Cuba. He was released from prison in March 2011 after serving almost twelve years under harsh conditions for having organized peaceful political protests.

In 2007 President Bush awarded Dr. Biscet the Presidential Medal of Freedom. The award was accepted on Dr. Biscet’s behalf by his children.