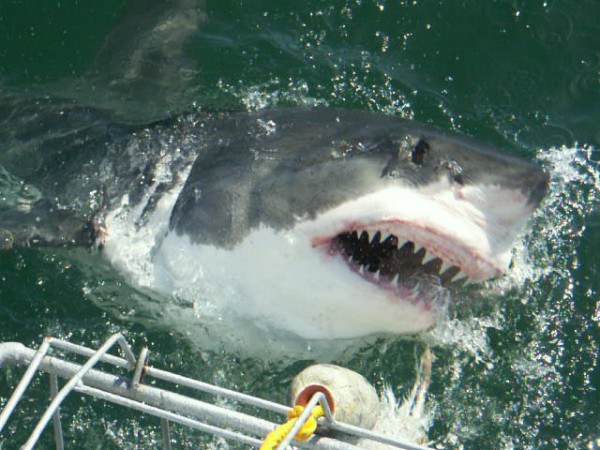 With Sharknado-fever sweeping Twitter last month and the 26th Shark Week having kicked off this week on the Discovery Channel, it’s evident we live in a shark-crazed culture.   Beyond innate curiosity, part of our fascination with these creatures is a desire to better understand their behavior in order to reduce violent encounters with humans.  Dictators induce similar fascination, and we seek to better understand their behavior with the goal of eliminating tyranny in our world.  Last summer, in a similarly titled piece, I posed the question of whether one would rather be at the mercy of sharks or dictators.  After a brief comparison of the two, my answer was unequivocal: “sharks.”  Since the ocean’s most notorious predators are once again seizing the spotlight, I’m revisiting the topic.

Have sharks gained any ground on dictators since last time?  Not at all.  A University of Florida study documented a total of 80 unprovoked shark attacks worldwide in 2012, of which seven were fatal.  It was the highest number of shark attacks in the past thirteen years.  This is terrible news, but still nowhere near the number of people being persecuted by dictators every day.

With a human population of nearly 7 billion, the percentage of people victimized by shark attacks compared to those suffering under dictatorship remains infinitesimal.  According to Freedom House’s Freedom in the World 2013 report, 2,376,822,100 people live in societies ranked as “Not Free.”  Too many individuals in these countries live in perpetual fear of their government’s brutality.  Add the people living in “Partly Free” countries, a list including states with dubious records on civil liberties such as Ecuador, Egypt, Haiti, Pakistan, and Venezuela, and the number balloons to 3,990,680,600. Put another way, 57 percent of the people on this planet live in countries where fundamental freedoms are either restricted or denied.   Separated by region, combining the percentage of the respective populations that live in “not free” and “partly free” countries, the worst offenders are the Middle East and North Africa at 98 percent, Sub-Saharan Africa at 87 percent, Eurasia at 72 percent, and the Asia-Pacific realm at 55 percent.

Drilling down, we see countries like Equatorial Guinea, North Korea, and Syria appearing in Freedom House’s “Worst of the Worst.”  These are governments earning bottom of the barrel rankings with respect to their political and civil liberties.  Only slightly above the “Worst of the Worst” are dictatorships like Belarus, China, and Cuba.

Let’s take a closer look at North Korea and its leader.  Despite possessing a youthful countenance and Western education, Kim Jong Un is very much Kim Jong Il’s son.  As indicated by the State Department’s 2012 Human Rights report, the young dictator continues his father’s repressive policies, complete with collective punishment gulags in which mothers who give birth to children are forced to watch guards execute their newborns.  The same report estimates that up to 200,000 people are enslaved in these prison camps.  Thanks to the efforts of organizations like Liberty in North Korea, more North Koreans are escaping their nightmarish country and exposing the regime’s inhuman cruelty.  Speaking on the Freedom Collection, dissident Kim Seong Min – who escaped in 1997 – describes life in North Korea and recounts how it was normal to see corpses rotting in the streets:

Syrian dictator Bashar Assad’s campaign to remain in power has resulted in the deaths of 100,000 people and fractured his country along sectarian lines.  As a result, Syria may be stuck in a quagmire of violence for years to come.  Syrian dissident Ammar Abdulhamid described how Assad exacerbated ethnic tensions and hastened Syria’s descent into civil war:

Comparing the numbers and weighing the testimonies of dissidents, I’d still take my chances in shark-infested waters before living in a dictatorship.  Coming from a free society, I have the option of making such a decision.  Moreover, I have protected rights that allow me to make choices in general and then voice my opinion as loudly as I wish.  Last year, seven people were tragically robbed of such rights as a result of fatal shark attacks; meanwhile, the two to four billion people in the world living under “not free” or “partly free” conditions were robbed of those rights by the policies of repressive dictators and authoritarian governments.