FREEDOM: THE INTERSECTION OF PRINCIPLES AND INTERESTS 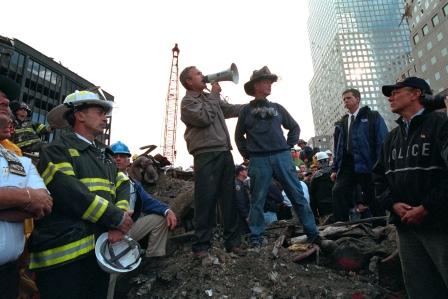 Standing on a pile of rubble and speaking through a bullhorn, President George W. Bush assured a stunned nation that the United States would find those responsible for the vicious attacks of September 11, 2001; but what started as a manhunt for terrorists transformed into a hallmark policy of the Bush Administration: supporting freedom around the world.  President Bush understood that tyranny and despair create conditions where people lose hope and become susceptible to radical ideology.  As he stated in his second inaugural address, “For as long as whole regions of the world simmer in resentment and tyranny–prone to ideologies that feed hatred and excuse murder–violence will gather, and multiply in destructive power, and cross the most defended borders, and raise a mortal threat. There is only one force of history that can break the reign of hatred and resentment, and expose the pretensions of tyrants, and reward the hopes of the decent and tolerant, and that is the force of human freedom.”

In free societies, people enjoy basic rights that encourage opportunity and optimism.  By no means are free societies perfect, but they foster conditions in which hope can thrive. Forums like the Freedom Collection show that individuals from different cultures, ethnicities, and religions yearn for the same basic freedoms.  Former Peruvian President Alejandro Toldeo and Speaker of the Polish Senate Bogdan Borusewicz, who led their countries’ transitions from dictatorship to democracy, offer unique perspectives on the universality of freedom:

The debate over America’s role in strengthening freedom and democracy worldwide has intensified since September 11, 2001, recently manifesting in the discourse surrounding Egypt and Syria.  Understandably, citizens of the free world are skeptical about engaging with foreign nations struggling to reshape their futures.  They would prefer the energy and resources of their governments focus on domestic challenges.  Unfortunately, free societies don’t exist in a vacuum.  The ambitions of dictators won’t stop if we disengage from the world.  In fact, with no one challenging them, the enemies of freedom become bolder and more dangerous.  Look no further than Syria’s Bashar al-Assad for proof.

This doesn’t mean the free world must endure perpetual war, but it should consider a firmer approach in its dealings with tyrants.  In his book The Case for Democracy dissident Natan Sharansky said, “I believe that all people are capable of building a free society.  I believe that all free societies will guarantee security and peace.  And I believe that by linking international policy to building free societies, the free world can once again secure a better future for hundreds of millions of people around the world.”   He challenges free societies to adhere to their values by developing comprehensive policies that support the struggle for liberty and are less accepting of dictators’ prerogatives.