NEW ON THE FREEDOM COLLECTION: ZBIGNIEW AND ZOFIA ROMASZEWSKI 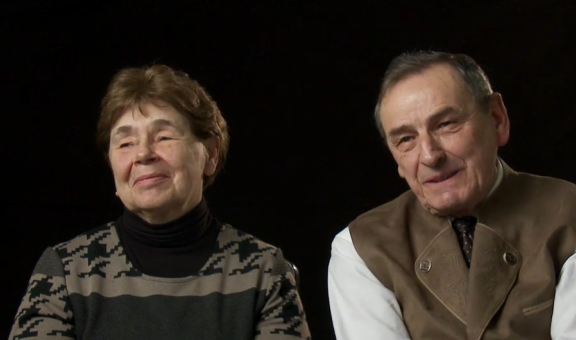 An oppressive communist government.  A culture of fear. Martial law.  These are not ideal ingredients for romance.  Yet, through decades of hardship that included Nazi brutality and communist dictatorship, Poland’s Zbigniew Romaszewski and Zofia Romaszewska were able to build a life together as husband and wife (and as freedom activists).  In 1976, they played a pivotal role in building a nationwide support structure for persecuted factory workers.  Ultimately they joined Solidarity, the first independent labor union in Soviet-controlled Eastern Europe that inspired millions to stand against the communist regime.  Even in the darkest days of Poland’s struggle, the Romaszewskis remained steadfast in their mission for freedom and encouraged their countrymen to do the same.

As children, Zbigniew and Zofia witnessed the horrors of World War II. Zbigniew and his family were sent to concentration camps. Zofia’s parents were part of Poland’s Home Army, an underground resistance movement against the Nazi occupation.

Zbigniew and Zofia both studied physics at the University of Warsaw. In the 1970s, following protests over rising prices by workers in the cities of Radom and Ursus, they helped to create the Workers’ Defense Committee (KOR), an organization that provided monetary and material relief to persecuted laborers and their families. In addition, KOR documented human rights violations committed by the regime. Zbigniew also served as a principal editor for the Madrid Report, a detailed account of human rights violations in Poland that was released during the 1980 review meeting of the Organization for Security and Cooperation in Europe (then known as the Conference on Security and Cooperation in Europe).

In 1980, worker strikes at Gdansk’s Lenin Shipyard led to the formation of Solidarity.  Zbigniew and Zofia became active members in the trade union. In December 1981, the government declared martial law in an effort to crackdown on political opposition. During this time the Romaszewskis went into hiding and established Radio Solidarity, an underground radio station that broadcast independent news and information to the Poles until the communist regime fell.

The Romaszewskis inspire us for their commitment to one another and freedom during an abysmal period in Eastern Europe’s history.  Learn more about their struggle to defeat communism on the Freedom Collection: