DENIED: ONE CUBAN DISSIDENT’S ELUSIVE TRIP TO THE U.S. 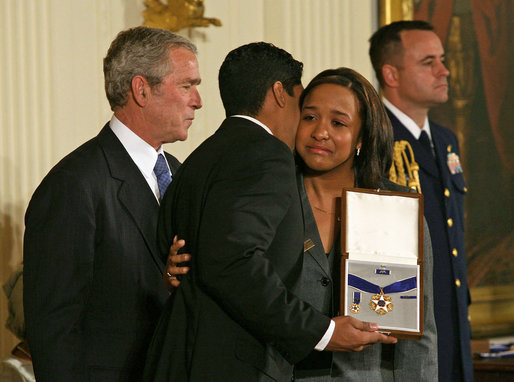 President George W. Bush presents the Presidential Medal of Freedom to Yan Valdes Morejon and Winnie Biscet in honor of their father Oscar Elias Biscet during a ceremony Monday, Nov. 5, 2007, in the East Room. “Oscar Biscet is a healer — known to 11 million Cubans as a physician, a community organizer, and an advocate for human rights,” said the President about the imprisoned physician. “The international community agrees that Dr. Biscet’s imprisonment is unjust, yet the regime has refused every call for his release.” White House photo by Joyce N. Boghosian

Today in Washington, President Barack Obama will present the Presidential Medal of Freedom to 16 individuals, including former President Bill Clinton, television celebrity Oprah Winfrey, and country music star Loretta Lynn. Although previous recipients were graciously invited to Washington to help celebrate the award’s fiftieth anniversary, at least one past honoree won’t be present:  Dr. Oscar Elias Biscet of Cuba.  He’d like to be there.  Cuba’s communist government would rather he not.

In 1963, President John F. Kennedy created the Presidential Medal of Freedom to recognize individuals who have made significant contributions to our nation and the world.  The medal itself was designed to symbolize the United States’ “determination to maintain the freedom and democracy of mankind” and the “strengths and convictions of our own early struggle for freedom.”

The symbolism of the design is especially poignant in the case of Oscar Biscet.  For his nonviolent opposition to Cuba’s communist regime and his advocacy for freedom and democracy, Biscet was arrested along with 74 other activists in 2003 in what became known as the Black Spring.  In 2007, President George W. Bush awarded the Presidential Medal of Freedom to Biscet for his courage.  Still in prison at the time (he wasn’t released until 2011), Biscet asked his family to accept in his absence.

While most of the Black Spring prisoners have left Cuba, Biscet is among a small number who refuse to leave permanently.  But that doesn’t mean he wouldn’t like to travel.

Earlier this year, the Cuban government ended its policy of requiring an exit visa and invitation for travel to a foreign country.  Since then some prominent dissidents have been allowed to go, speak their mind, and return home without incident—at least so far.  Others, like Biscet, have applied to Cuban authorities for passports and been rebuffed.  They would probably let Biscet go, if he would agree not to come back.  No doubt in the communists’ view this would make him less of a threat to their power.

Biscet recently told Radio Marti that “I think they made ​​a mistake by not letting me take this trip, because ultimately I am not an imminent threat to the government and it could have been a gesture of civility and progress.”  Instead, Biscet still considers himself a “political prisoner of the government.”

Biscet’s 2007 Presidential Medal of Freedom is in safekeeping as part of the Bush Institute’s Freedom Collection.  We can all look forward to the day when he can come and take it home to a free and democratic Cuba.

Amanda Schnetzer is the Director for Human Freedom at the George W. Bush Instittute.