OBSTACLES TO FREEDOM, IN UKRAINE AND BEYOND 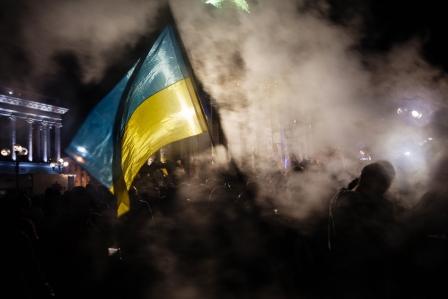 The Ukraine crisis is a pointed reminder that peaceful revolutions are but the first phase in the process of building sustainable democracies. As developments over the past decade in Ukraine have demonstrated, many obstacles, and sometimes many adversaries, can block the path to the consolidation of the institutions are necessary for free societies.

Ukraine alone has faced many of these hurdles, both in the wake of the 2004-2005 Orange Revolution and today, in the aftermath of the EuroMaidan protests.  Here are several of the most serious roadblocks:

1. A hostile neighboring power:  Russia’s leader, Vladimir Putin, has all but declared that Ukraine does not have the right to full sovereignty.  He has claimed the right to dictate Ukraine’s system of government—federalism—and political and economic orientation, which he says must be “neutral” between Russia and Europe.  Otherwise, we can assume that Russia will step up its interventionism in Ukraine’s affairs, possibly through military action but more likely through economic and political subversion.  Ukraine is not the only country where people’s democratic aspirations run afoul of unfriendly neighbors. Hostility from Iran, Saudi Arabia, and elsewhere has added to the problems experienced by societies inspired by the spirit of the Arab Spring.

2. An unfriendly neighborhood:  Freedom movements have a much better chance of long-term success if neighboring countries are sympathetic and helpful.  The successes of Poland, the Czech Republic, Estonia and other post-Communist countries in Eastern Europe was helped greatly by the countries of Western Europe, which provided assistance, security guarantees, and a template for successful democratic development.  Even so, the proximity of Russia and other authoritarian neighbors has made matters unpleasant for democracies like Poland and the Baltics.  Ukraine, unfortunately, shares borders with Russia and Belarus, whose leaders devote considerable resources and thought to the development of strategies to prevent the emergence of movements like the EuroMaidan forces.  Another country which faces serious problems due to a hostile neighborhood is Tunisia.  Tunisia is waging a thus far successful battle for democracy in a region where many forces share a hostility to freedom, repressive governments, radical Islamists, terrorists, and avaricious militias.

3. Ethnic/national divisions:  Much too much has been made of the differences between Ukrainian speakers and those whose first language is Russian.  But when a hostile outside power is determined to exploit divisions, as Russia is today, the result can be combustible.   National divisions are the number one threat to political change in Burma, and could be a factor if a serious movement for democracy ever got underway in China, where the authorities have mobilized propaganda campaigns aimed at exacerbating the resentment that Han Chinese feel towards minorities like Uyghurs and Tibetans.

4.  Finally, ineffectual, authoritarian-minded, and corruption-prone leadership is a threat to practically every revolution.  It’s often and correctly stated that overthrowing a dictatorship is the easy part; figuring out how to implement effective democratic governance is much more difficult.  Ukraine wouldn’t be in its current mess if the Orange government remained unified and focused on the essential reforms that the Ukrainian political system and economy required, instead of its leaders engaging in fights among themselves.  Preventing a repeat of the Orange failure should be at the top of the agenda for the new, reformist leadership.

Arch Puddington is vice president for research at Freedom House and a Fellow in Human Freedom at the Bush Center.