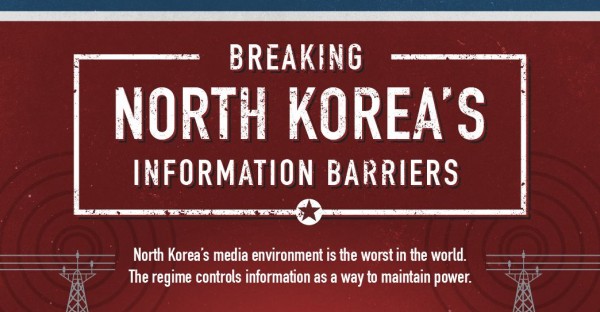 Forty days.  That’s the timespan between September 3 and October 14 that North Korea’s Kim Jong Un vanished from public sight. Speculation ran rampant outside North Korea as to his whereabouts, ranging from illness to a potential coup.  One of the wilder theories attributed his disappearance to Swiss cheese-related health issues.  Meanwhile, the country’s state-controlled media explained Kim’s absence as a product of “discomfort.”   This incident exemplified the murkiness that surrounds information in North Korea.

The North Korean regime maintains the world’s worst media environment. Independent press is nonexistent. Televisions and radios must be modified to receive government approved channels only. Foreign media of any kind is illegal. Defiant citizens risk imprisonment or worse; in fact, the UN Commission of Inquiry’s report on North Korea details public executions for those in possession of DVDs with South Korean dramas.

The situation is not hopeless though.  North Korean society is undergoing a transformation that, coupled with external forces, is changing the media environment.  As a result, North Korea’s formidable information barriers are fracturing.

In the mid-1990’s, famine devastated North Korea and an estimated two million people died of starvation.  Government support structures that once provided people with basic necessities such as food, clothing, and employment collapsed.  North Koreans were faced with a choice: starvation or self-sufficiency.  They chose the latter and developed a system of informal markets fueled by smuggled Chinese goods.

But in addition to providing food and other basic goods, the markets exposed North Koreans to new forms of media and affordable technology including foreign DVDs and players, televisions, MP3 players and radios.

DVDs of South Korean dramas have become popular and showcase the relative affluence enjoyed by people in foreign countries. A defector interviewed for a 2012 InterMedia study on North Korea’s changing media environment said, “It is easy to compare the living standards of North and South Korea when watching these dramas.  There are a lot of things that I see in the dramas that we were not exposed to or had no access to while growing up.”  The same study noted that, “North Koreans are well-practiced consumers of heavy-handed propaganda and the absence of such propaganda in South Korean dramas increases their credibility.”

InterMedia also pointed to a 2010 survey of North Korean refugees and travelers showing DVDs were the most popular form of outside media with 48 percent of respondents saying they had viewed them, a 28 percent increase from a similar 2008 survey.  Thirty-nine percent cited DVDs as an important source of information, the highest for any form of outside media.

Foreign radio broadcasts produced by international governments and South Korea-based defector organizations also penetrate North Korea.  Outside radio is the only nationwide source of credible, real-time news.  Listeners go to great lengths to bypass government barriers, illegally modifying radios to receive foreign signals and even building their own from wood and spare electronics. While radio is not as popular as DVDs, 27 percent of North Korean defectors and travelers said they listened to it.  More importantly, 60 percent of those listeners then shared what they heard with either friends or family.

There are also unconventional methods of injecting information into North Korea.  The 38th parallel may be the most fortified border on Earth, but it hasn’t deterred South Korea-based defector groups from bypassing it.  Using large helium balloons as delivery mechanisms, these organizations send DVDs, USB drives, radios and pamphlets containing pro-freedom and democracy information over the border.  As the balloons drift across the North Korean country side, automatic timers release the content to be discovered by people below.

North Koreans crave information and will risk everything to get it.  These risks aren’t without benefit. People are seeing past the regime’s lies and envisioning their potential through foreign dramas. They’re developing more positive attitudes toward countries they were brainwashed to hate.  Informal markets function more efficiently thanks to communications technology.  Outside information has become a fulcrum for social interaction as those who possess it want to share with others. And refugees are creating two way information channels with family still inside North Korea.

Such developments have potential for greater socioeconomic change in North Korea and argue for a sustained commitment from free societies to further break these barriers.  This should include a broad spectrum of approaches ranging from traditional, continued U.S. government support for radio broadcasts and building the capacity of defector organizations, to cutting edge, fostering partnerships between activists and Silicon Valley on devising new strategies for satiating North Koreans’ information appetite.