JOSEPH KIM: A STORY OF HUMAN RIGHTS IN NORTH KOREA 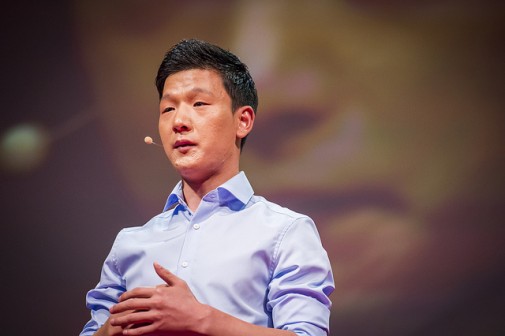 Twelve years ago, the trajectory of Joseph Kim’s young life gave no earthly hint that the North Korean boy would end up a university student in America. No earthly hint whatsoever.

In 2002, Kim, was a 12-year old orphan on the streets of Pyongyang, the capital city of his home country. His daily life had a simple, cruel organizing principle: find food. And find it during brutal winters, away from the all-seeing eye of his country’s Stalinist government and knowing that his father had starved to death in this same country.

Kim endured this dehumanizing reality for three years. His mother had disappeared. His sister had escaped to China. He was all alone in a land where his government’s calculated mishandling of a harsh famine in the middle of the 1990s resulted in the death of an estimated two million North Koreans.

Finally, Kim faced a choice that no 12-year boy in any country — any country — should ever have to face: Risk death by escaping the borders of his own homeland or die from starvation like his father, who would share morsels of food with his only son while he suffered himself from hunger’s wrenching pains.

Escape, Joseph did. He walked one day across the borders of his country, hoping the border guards trained to shoot escapees would not think to look for him in the light of day. Night-time escapes into neighboring China were the normal path for those seeking refuge.

He also headed to China to find his sister. Lacking much of an education, he didn’t fathom the breadth and depth of China and its massive population.

The then 16-year old teenager found refuge – if that is what you can call it – in a mountainside. He still had to scavenge for food, until he was found by an elderly Korean-Chinese woman. Eventually, a missionary society helped him find a foster home in the United States.

Kim told his story during a recent interview at the Bush Institute offices in Dallas. More than one million people have heard it as well through a 2013 TED talk that went viral after Kim told of his experiences.

The popularity of that video aside, polls show most Americans only have a slight understanding of the deprival of human rights in North Korea. We may have some awareness about North Korea’s cultish, ruthless despots and the occasional nuclear-rattling threats coming from them. But we know less about the indignities of life in this isolated country.

Those indignities have been the subject of intense debate this month at the United Nations. A U.N inquiry led by retired Australian Judge Michael Kirby produced a report detailing the realities that North Koreans endure.

First presented in February, the Commission of Inquiry’s revelations include such human rights abuses as denying North Koreans access to food, the existence of prison camps, the practice of torture, arbitrary arrest and detention, and the limiting of individual movement within the country, including restricting the freedom to leave the country.

What’s more, the document found that the human rights violations are widespread, systematic and part of government policy. Also, they often constitute crimes against humanity. The report summed up those crimes this way:

Now, the U.N. is determining what to do with these findings. Japan and the European Union are working on a resolution that would have the Security Council refer North Korea to the International Criminal Court in the Hague. Secretary of State John Kerry and U.S. Ambassador to the United Nations Samantha Power have pressed the rights violations as well. In short, the world community is brightening the spotlight on the conditions in North Korea.

Ten years ago this month, President George W. Bush and Congress put their own spotlight on the problem. He signed the North Korean Human Rights Act, which both houses of Congress overwhelmingly approved. The bipartisan law provided support for defectors, humanitarian aid for North Koreans, and backing for non-governmental organizations trying to improve the lives of North Koreans. It also promoted access to information for North Koreans.

Joseph Kim’s journey puts a human face on the realities within his country, especially the realities that affect children. The sad fact is that there are many other orphans like him. What’s more, nearly 28 percent of North Korean children suffer stunted growth due to the conditions under which they live. Also troubling, Kim and others like him still must worry about reprisal from the North Korean government.

Yet there is hope in the change of the trajectory of his young life. Kim now is an international business student in the United States. He is perfecting his English. And he has a book coming out next year.

Because of people like Joseph Kim, we cannot let up on the cause of human rights in North Korea. As he put it, in simple and compelling terms, this struggle is about the human condition itself.