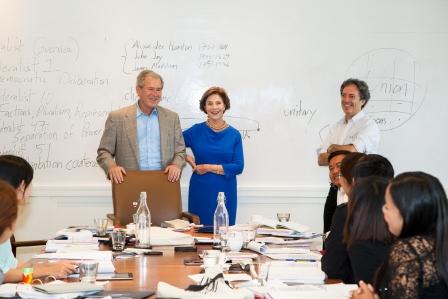 The Bush Institute’s Human Freedom team focused on new and innovative ways in 2014 to support freedom advocates, press for U.S. leadership to advance freedom in the world and build up its FreedomCollection archive. The effort included events at the Bush Institute, timely commentaries, interviews with dissidents and new programs dealing with North Korea and Burma.

January began with a special focus on the human rights conditions within North Korea. Infographics were released throughout the year, spotlighting how North Koreans are being tortured, imprisoned and repressed for any hint of divergence from the official party line.

The infographics also pointed to ways that North Korea’s blockade against the free flow of information is being broken. As one infographic pointed out, DVDs and cellphones are starting to expose North Koreans even more to a larger world.

In October, the Institute brought a number of North Korean refugees to meet with President George W. Bush. The refugees also participated in a day-long session with leaders from the worlds of diplomacy, academia and the private sector to help develop recommendations for advancing the cause of freedom in North Korea.

As 2014 drew to a close, the Institute prepared to release a call-to-action report on the human rights situation in North Korea. Original research accompanying the report will take a look at issues like Americans’ understanding of those grim realities and the transition to life in freedom for refugees who resettle in the United States.http://www.bushcenter.org/blog/2014/10/27/five-facts-you-should-know-abo…

The Liberty and Leadership Forum launched this year as part of the Bush Institute’s focus on cultivating and developing leaders. The effort selected 18 aspiring leaders from Burma for a year-long educational and training program thatbegan in the United States with an intensive three-week summer seminar.

The group was selected after hours of interviews by Amanda Schnetzer, director of the Bush Institute’s Human Freedom initiative, and Elizabeth Hoffman, program manager for the Human Freedom Initiative, along with a selection committee. The pair also traveled to Burma to meet with candidates and develop the program.

Once the Burmese Young Leaders convened in Dallas, they met with President George W. Bush and First Lady Laura Bush. They also participated in classes that concentrated on the principles of liberal democracy and economic freedom, the lessons of other democratic transitions, and practical leadership skills. Later, they traveled to Washington, D.C. for four days, including a celebration of the Fourth of July.

After they returned home, the Young Leaders began to reinforce learning with the first in a series of in-country training sessions.  The session, led by Hudson Institute fellow Christopher Sands, focused on the principles and practices of federalism. The Young Leaders will continue their studies in early 2015, returning to the United States next summer to graduate from the program.

On Top of the News

Throughout 2014, the Human Freedom team stayed on top of breaking events and big news stories. They offered commentary on emerging situations from Cuba to Ukraine to North Korea.

As the U.S. normalized relations with Cuba in December, Bush Institute program coordinator Chris Walsh interviewed Cuban dissident Normando Hernandez for his reactions. Earlier in 2014, as a crisis erupted in Ukraine, Bush Institute Human Freedom fellow Arch Puddington wrote about the obstacles to freedom there. After the United Nations issued its report on North Korea’s human rights abuses in February, Bush Institute fellow Victor Cha commented on the findings with a Freedom Collection interview.

The 2014 calendar also included some major anniversaries for the cause of freedom. The Bush Institute’s Lindsay Lloyd, program director of the Freedom Collection, recalled the 25th anniversary of the fall of the Berlin Wall with an essay about the hidden influence of Father Jerzy Popieluszko, a Polish priest whose championing of freedom led to his death in 1984. This year also brought the 25th anniversary of the Tiananmen Square crackdown on pro-democracy activists in China, which Bush Institute editorial director Bill McKenzie observed with a profile on CNN’s Belief Blog of one Chinese family’s search for religious freedom in Texas.

As 2015 unfolds, the Bush Institute will continue to champion the cause of freedom and democracy in North Korea, Burma and other parts of the world. Freedom, after all, is essential to an enduring peace and prosperity.