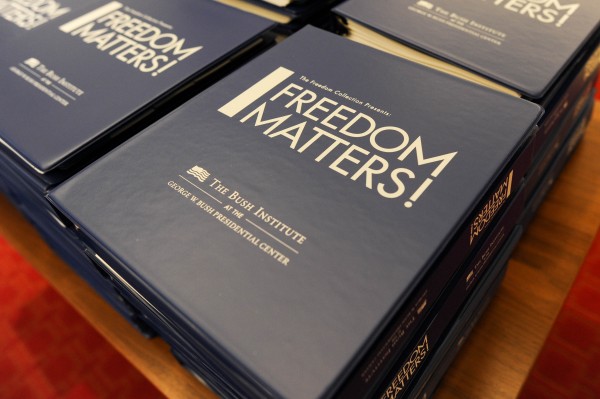 It was exciting to learn that North Texas’ Lovejoy Independent School District incorporated the Bush Institute’s Freedom Matters!curriculum into its recent “Celebrate Freedom Week.” Each fall, students in Texas public schools study their country’s founding documents and the principles of freedom.  Just back to school, Lovejoy ISD students used the curriculum to explore liberty in their own country and the experience of freedom and democracy around the world.

National assessment data reveals that only 24 percent of high school seniors in the United States are “proficient” in civics, a trend going back more than a decade.  That’s simply not sustainable for a free society whose life blood is informed participation from its citizenry. That’s why the Institute developed Freedom Matters!, a supplemental curriculum that helps students connect the foundations of freedom to today’s global struggles for liberty.

Earlier this year, Former First Lady Laura W. Bush offered the following message as she officially launched Freedom Matters!, “With solid foundations in civics, students are more likely to be informed, engaged citizens in our country. Our goal with Freedom Matters! is simple:  to foster the next generation of Americans to care about democracy and individual liberty at home and abroad.”

Freedom Matters! can be viewed here and downloaded free-of-charge.