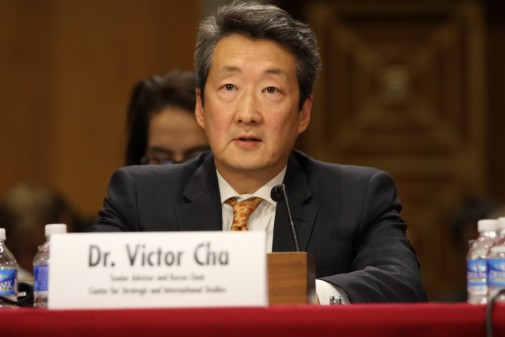 “No issue has raised more of a response than the direct calling out of the regime for how it treats its people. In the end, the North Korean state is built on a myth of utopian leadership. The more that myth is broken, the more the regime will be forced to change,” concluded Victor Cha, a George W. Bush Institute Human Freedom Fellow and Korea Chair at the Center for Strategic and International Studies, during his recent Congressional testimony.

He argued that a successful strategy links national security to human rights saying, “any future denuclearization strategy for North Korea must not ignore the human rights condition in the country. The international mobilization on North Korean human rights lacks partisan coloring, remains resilient, and puts as much pressure on the regime as the standing UNSCR [United Nations Security Council resolution] sanctions regime. This is because the movement hits at the very heart of the regime’s legitimacy.”

Cha pointed to the small North Korean refugee community in the United States as “champions of the movement” for pressuring Pyongyang on its brutal human rights record.  North Korean refugees not only humanize the issue with their personal stories, but also become conduits into North Korea, sending remittances and information to family still inside the country.  Cha argued that the United States needs to strengthen its support of these individuals, calling them “the most direct way to improve the human condition in North Korea and to spread word of the regime’s lies.”