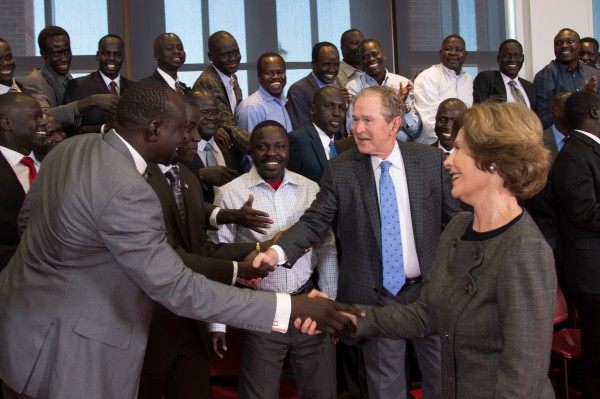 Last week, the Bush Center welcomed approximately 70 Lost Boys and Girls to tour the Presidential Library and Museum.  Many Lost Boys and Girls of South Sudan resettled in the U.S. upon being displaced or orphaned during the country’s civil war.  After this morning’s tour, they received a surprise visit from President and Mrs. Bush, who offered their support. “Laura and I appreciate your courage and perseverance,” President Bush told the group.  “We can learn lessons from people who come from difficult circumstances.”

President Bush also recognized South Sudan’s fragility as a nation, which became an independent state in 2011, and encouraged the Lost Boys and Girls to play a positive role in their country’s development.  “I’m concerned about the struggles in South Sudan,” President Bush continued.  “I’m not surprised that with independence comes difficulty. As you tell your stories and build lives for yourselves here in the U.S., remember you have influence and can promote peace and reconciliation in your homeland.”

He concluded his remarks noting that the U.S. should stay engaged with South Sudan as they build a path to democracy.

In the late 1980s, years of civil war drove some 20,000 young boys and girls from their villages in South Sudan; many were only six or seven years old. They walked 1,000 miles across hostile terrain to Ethiopia hoping to escape the carnage. Half the children lost their lives before the survivors ultimately found sanctuary in Kenyan refugee camps. They became known as the Lost Boys and Girls.  In 2001, thousands came to the United States seeking new lives free from the chaos in South Sudan; more than 100 resettled in the Dallas-Fort Worth area.