Kent Patton is the editor of the Freedom Square blog. 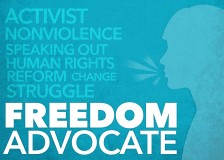 On Thursday, December 5, while I was on the overnight flight from New York to Johannesburg, former South African president Nelson Mandela died.  When we landed in Johannesburg Friday morning, our South African pilot announced that this man of moral…

This July 4th, most Americans gathered with family, neighbors, friends, and fellow patriots to celebrate the United States’ 237th year as an independent nation. For some, the narrative of this day doesn’t move much beyond America’s fight against the British Crown and the successful establishment of a government of, by, and for the people. As we watch events unfold in Egypt, however, it is fitting to remember how radical and revolutionary those brave men and women were in 1776.

DEMOCRACY ON THE MARCH IN PAKISTAN

After an anxious week of threats and violence, voters in Pakistan went to the polls on May 11to elect a new parliament. They gave another mandate to former Prime Minister Nawaz Sharif and his Pakistan Muslim League-Nawaz Party (PML-N) and sent the ruling Pakistan People’s Party to join the opposition.

On April 23, Bhutan held elections for its National Council, the upper body of the parliament. By all accounts, and there aren’t many, the elections were successful and the newest democracy in Asia has shown the world how bold vision and leadership can reshape a country.

RUSSIA’S LEADERS FEAR THE TRUTH AND THE PEOPLE

Once again, the Russian domestic election monitoring organization GOLOS is facing prosecution for the crime of trying to ensure free and fair elections in Russia (read about it here). As the only national domestic monitoring organization, GOLOS has played a critical role in highlighting fraud in Russian elections. Their powerful and independent reports have put them squarely in the sights of Kremlin leaders who fear an honest and transparent approach to elections.

With the inauguration of Uhuru Kenyatta as the fourth President of Kenya, one can’t help but have mixed emotions. On one hand, there’s good news: the presidential election was one of the most democratic in recent Kenyan history (see election observation reports here and here). The people of Kenya deserve credit for implementing a free and fair process under a new constitution and electoral laws, not just for president but for the national assembly, senate, governors and country assemblies. The 2013 elections were clearly an improvement over 2007, when widespread violence after disputed elections shook the entire region.

ZIMBABWE UNDER THE HEEL OF MUGABE

President Robert Mugabe has been a disaster for the people of Zimbabwe in every conceivable way. The country has been bankrupted, and its agricultural system dismantled. Its international influence is nearly non-existent, and its domestic institutions perverted by corruption and politicization. Life expectancy and other key health indicators are abysmal. Much like other authoritarians, Mugabe and his party have treated Zimbabwe as their personal property. Freedom House continues to classify Zimbabwe as “not free,” ranking near the bottom in both its Civil Liberties and Political Rights categories.

For decades we have honored the heroes of the 1968 Prague Spring and their righteous fight against the Soviet Union. And just this decade, we have watched reformers adopt the mantle of the Arab Spring and throw off decades of oppressive rule. However, we are reminded that winter sometimes follows a political spring. It would take another 20 years for Prague and the rest of Eastern Europe finally to throw the Soviets out. And the revolutions in the Arab world are still in the process of defining themselves, particularly in Egypt and Libya. But the heroes of Cuba’s Black Spring deserve particular honor as we mark the tenth anniversary of their protests. We can only hope that the suffering they have endured will soon be over, ushering in a season of freedom.

HOPE FOR VENEZUELANS (AND SYRIANS AND IRANIANS AND CUBANS…)

Transitions are always a time for reflection, anxiety, and opportunity. Venezuelans face a transition many may not have been expecting, given the lack of transparency about their late leader’s health. But this transition could bring much good to the Americas and oppressed people everywhere—if the country can reverse its undemocratic trajectory.

FIRST THE SHURA AND THEN…MUNICIPAL COUNCILS

The news last week that King Abdullah of Saudi Arabia has followed through on his commitment to appoint women to the consultative Shura Council marks not only an historic change for the Kingdom but also an important advance for women’s rights in the Arab world.